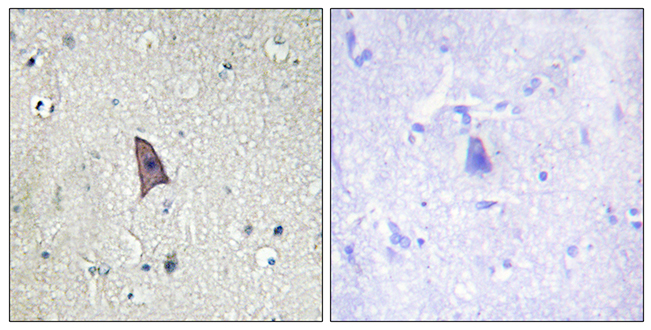 Application Notes
Recommended diltion:
IHC: 1:50~1:100; ELISA: 1:40000
*Suggested working dilutions are given as a guide only. It is recommended that the user titrates the product for use in their own experiment using appropriate negative and positive controls.

Have you cited CABT-L4144 in a publication? Let us know and earn a reward for your research.

Background: Angipoietin-1 activation of the tyrosine kinase receptor Tek expressed mainly on endothelial cells leads to survival and stabilization of endothelial cells. Studies have shown that Angiopoietin-1 counteracts permeability induced by a number of stimuli. Here, we test the hypothesis that loss of Angiopoietin-1/Tek signaling in the vasculature would increase metastasis. Methods: Angiopoietin-1 was deleted in mice just before birth using floxed Angiopoietin-1 and Tek mice crossed to doxycycline-inducible bitransgenic ROSA-rtTA/tetO-Cre mice. By crossing Angiopoietin-1 knockout mice to the MMTV-PyMT autochthonous mouse breast cancer model, we investigated primary tumor growth and metastasis to the lung. Furthermore, we utilized B16F10 melanoma cells subcutaneous and experimental lung metastasis models in Angiopoietin-1 and Tek knockout mice. Results: We found that primary tumor growth in MMTV-PyMT mice was unaffected, while metastasis to the lung was significantly increased in Angiopoietin-1 knockout MMTV-PyMT mice. In addition, angiopoietin-1 deficient mice exhibited a significant increase in lung metastasis of B16F10 melanoma cells, compared to wild type mice 3 weeks after injection. Additional experiments showed that this was likely an early event due to increased attachment or extravasation of tumor cells, since seeding of tumor cells was significantly increased 4 and 24 h post tail vein injection. Finally, using inducible Tek knockout mice, we showed a significant increase in tumor cell seeding to the lung, suggesting that Angiopoietin-1/Tek signaling is important for vascular integrity to limit metastasis. Conclusions: This study show that loss of the Angiopoietin-1/Tek vascular growth factor system leads to increased metastasis without affecting primary tumor growth.

How dynamic is place-based traditional ecological knowledge (TEK)? In what ways can its generative and conservative processes allow adaption to a changed environment? How do different cultures mediate TEK of a shared place? We address these questions with an in depth study of TEK of the diverse and socioecologically salient genus Rhododendron among the indigenous Naxi and immigrant Nuosu Yi of Mt. Yulong, NW Yunnan, China. TEK in both cultures is rich and intimately connected to the seasonal and elevational progression of rhododendrons. Naxi and Yi knowledge of trends and drivers of change parallel those in ecological studies. Knowledge richness was connected with place (urban vs. rural dwelling and elevation of village) and the immigrant Yi had a knowledge base as rich as that of the indigenous Naxi. Both Yi and Naxi interviewees credited this knowledge equality to a combination of generative processes (Yi villages were higher in elevation and Yi livelihoods made more use of mountain resources, which enabled them to acquire knowledge of plants quickly) and conservative processes (Yi migrated from an equally diverse mountain region in which Rhododendron is also salient; its position was retained in their system of TEK, though its elements were adapted). Among rural Naxi, cultural systems (seasonal festivals and ethnotaxonomy) conserved knowledge, even while their direct use of rhododendrons decreased with changing life-ways.