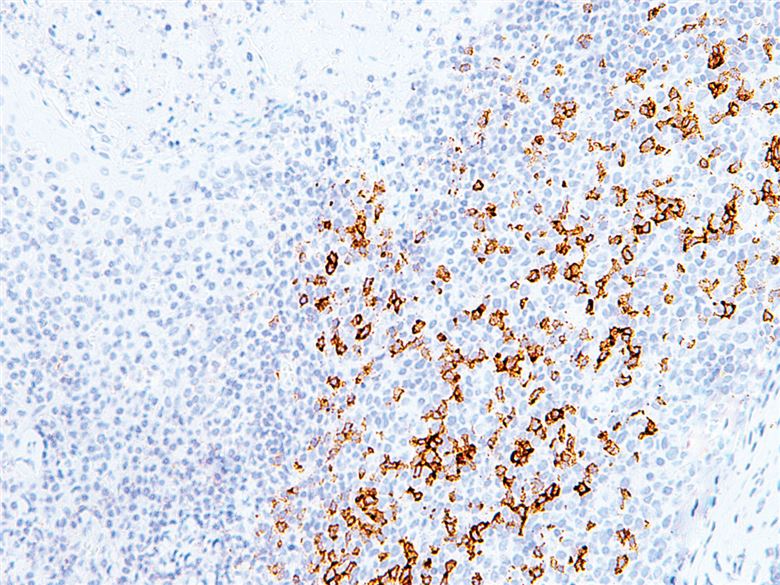 Have you cited CABT-L2940 in a publication? Let us know and earn a reward for your research.

The inhibitory co-receptor programmed death 1 (PD-1, encoded by pdcd1) and its two ligands PD-L1 and PD-L2 comprise an important immune inhibitory signaling pathway for defense against microbes and for self-tolerance. Unlike other members of the B7-CD28 family, expression of PD-L1 and PD-L2 is not limited to the immune system. In this study, we determined that a polyclonal antibody (pAb) (R&D Systems) against extracellular domains of mouse PD-L2 (mPD-L2) could recognize antigen(s) in diverse mouse tissues, including the anterior and intermediate pituitary gland, olfactory bulbs and olfactory epithelium, tongue epithelium, keratinized epithelial cells and skin and whisker hair follicles. These findings differed from previous reports of mPD-L2 localization. Reverse transcription PCR and Western blot analyses, however, were unable to detect any mPD-L2 transcripts or proteins of the 25-kD predicted molecular weight in RNA and protein extracts, respectively, from the above tissues, suggesting that the anti-mPD-L2 pAb cross-reacts with certain novel antigen(s). Developmental studies revealed that the earliest expression of mPD-L2-like antigen was in the olfactory epithelium at embryonic day 12.5 (E12.5). At E14.5, mPD-L2-like antigen was present in the skin, tongue and follicles of the skin and whiskers. The distribution patterns of mPD-L2-like antigen remained similar from E18.5 to adulthood. The results of bioinformatic analysis and other experiments suggested neural cell adhesion molecule and hemicentin-1 as candidate proteins with cross-reactivity to the anti-mPD-L2 pAb. These results demonstrate that care is required in interpreting staining patterns generated when anti-PD-L2 pAb is used to locate PD-L2-expressing cells in the central nervous system and epithelial tissues, such as the olfactory epithelium. In addition, this anti-PD-L2 pAb may be used as an alternative antibody for labeling the olfactory epithelium during embryonic development in mice.

PDCD1 and PDCD1LG1 polymorphisms affect the susceptibility to multiple myeloma

Single-nucleotide polymorphisms (SNPs) of the programmed cell death protein-1 (PDCD1), programmed cell death protein-1 ligand-1 (PDCD1LG1), and cytotoxic T lymphocyte-associated antigen-4 (CTLA4) genes are implicated in the pathogenesis of some cancers. We investigated the role of PDCD1, PDCD1LG1, and CTLA4 SNPs in MM pathogenesis and the susceptibility to and clinical features of multiple myeloma (MM). We obtained genomic DNA from 124 patients with MM and 211 healthy controls and detected PDCD1 (rs36084323, rs41386349, and rs2227982), PDCD1LG1 (rs2297136 and rs4143815), and CTLA4 (rs733618, rs11571316, rs231775, and rs3087243) genotypes using the polymerase chain reaction-restriction fragment length polymorphism method or the TaqMan allelic discrimination real-time PCR method. The patients with MM had a significantly higher frequency of the PDCD1 GCC/GCC haplotype (rs36084323/rs41386349/rs2227982) compared with the healthy controls. PDCD1 rs2227982 CC genotype was associated significantly with a higher frequency of bone lesions. Patients with PDCD1LG1 rs2297136 TT and TC types (high-expression types) showed lower albumin level than those with CC genotype. In addition, the PDCD1LG1 rs4143815 CC and CG types (high-expression types) were associated significantly with higher frequency of patients who were treated with thalidomide and/or bortezomib. However, there was no statistical significance between CTLA4 polymorphisms and clinical variables of patients with MM. There were no significant differences between all the polymorphisms and OS. Our study indicates that the PDCD1 haplotype is associated with a susceptibility to MM. The PDCD1 rs2227982 and PDCD1LG1 rs2297136 affect the clinical features of multiple myeloma patients.