Intended Use
This kit is used for Horse Meat identification or adulteration detection in raw, uncooked meat or grounded meat.
Storage
This kit is stored at 2 ~ 8 °C, protect from light.
Sensitivity
Ground horse meat proteins were extracted and tested at various concentration (w/v %). Horse meat proteins were tested in the kit using 5%, 0.5%, 0.05%, 0.005%, and 0.0005% (v/v) samples. The sensitivity of the kit has been assessed as 0.005% (1 part per million or 1 ppm). 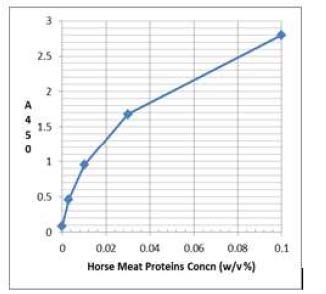 General Description
The 2013/2014 meat adulteration scandal is ongoing in Europe; foods advertised as containing beef were found to contain undeclared horse meat, as much as 100% of the meat content in some cases, and other undeclared meats, such as pork. The issue came to light on 15 January 2013, when it was reported that horse DNA had been discovered in frozen beef burgers sold in several Irish and British supermarkets. It is speculated that Donkey and Mule may have been used in tainted beef or pork. While horse meat is not harmful to health and is eaten in many countries, it is considered a taboo food in many countries including the UK and Ireland. As horses are relatively poor converters of grass and grain to meat compared to cattle, they are not usually bred or raised specifically for their meat. Instead, horses are slaughtered when their monetary value as riding or work animals is low, but their owners can still make money selling them for horse meat. Therefore, horses, donkeys or mules used may not be from 'healthy herds'. People are also concerned about the presence of some drugs used in animals that are banned for human use. The presence of many animal viruses of diseases in non-approved, unhealthy animals is an issue as well. Some of the largest meat suppliers in Europe (TESCO, LIDL, Iceland, ALDI, Ikea etc) are involved in meat adulteration. Horse meat found its way into popular fat food market (Taco Bell, Burger King etc, school lunches, and hospital food. Jewish and Muslims religion prohibit eating horses. Adulteration of beef or chicken with pig is also a problem for Muslims, whereas Hindu religion prohibits the meat of the Cow or Beef. Regardless of the ethics or religious concerns, it is simply unethical to sell horse meat that is labeled as beef. A huge stock of unsold beef, pork, and chicken has been recalled due to the concerns of horse meat adulteration resulting into millions of dollar in monetary damage. Many consumers have also lost trust in the meat industry and stopped buying meat.

Have you cited DEIASL023 in a publication? Let us know and earn a reward for your research.