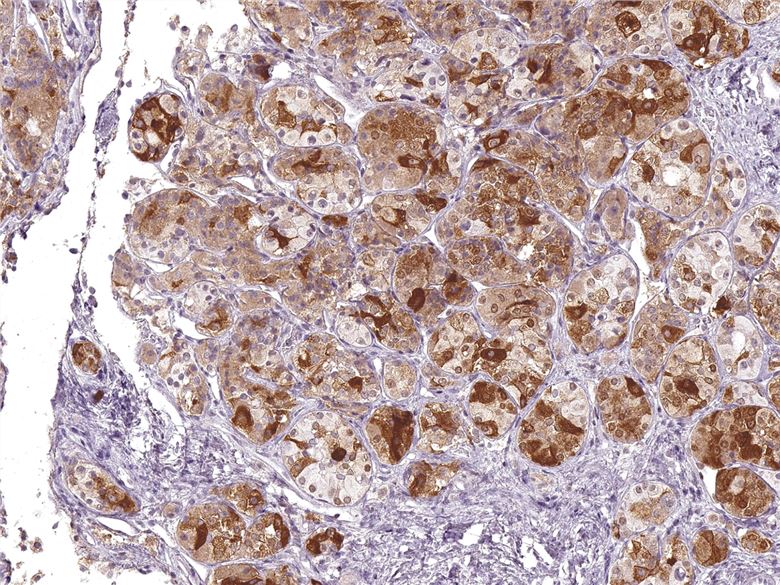 Have you cited CABT-L2883 in a publication? Let us know and earn a reward for your research.

HORMONES-INTERNATIONAL JOURNAL OF ENDOCRINOLOGY AND METABOLISM

It is well established in various experimental models that luteinizing hormone (LH) stimulated testosterone (T) production of Leydig cells is the key endocrine stimulus of spermatogenesis. The role of the other gonadotrophin, follicle-stimulating hormone (FSH), is as yet somewhat unclear given that several clinical conditions and experimental models, including men with inactivating FSH receptor (R) mutation and male Fshb and Fshr knockout mice, maintain fairly normal spermatogenesis and fertility. Furthermore, FSH treatment of male infertility has produced at best modest results. On the other hand, there are animal species (e.g. teleost fishes and the Djungarian hamster) where spermatogenesis is primarily FSH-dependent. The purpose of this article is to briefly review the gonadotrophin dependence of spermatogenesis in several model species and examine how it has shifted during evolution from FSH to LH dominance. The information may provide new insight into the role of FSH treatment of male infertility.

Many long non-coding RNAs (lncRNAs) have been identified in several types of human pituitary adenomas and normal anterior pituitary, some of which are involved in the pathogenesis of pituitary adenomas. However, a systematic analysis of lncRNAs expressed at different developmental stages of normal pituitary, particularly in rats, has not been performed. Therefore, we contrasted two cDNA libraries of immature (D15) and mature (D120) anterior pituitary in rat that were sequenced on an illumina HiSeq Xten platform, and a total of 29,568,806,352 clean reads were identified. Notably, 7039 lncRNA transcripts corresponded to 4442 lncRNA genes, and 1181 lncRNA transcripts were significantly differentially expressed in D15 and D120. In addition, 6839 protein-coding genes (<100 kb upstream and downstream) were the nearest neighbors of 4074 lncRNA genes. An interaction network of lncRNAs and the follicle-stimulating hormone beta-subunit (FSHb) gene was constructed using the lncRNATargets platform, and three novel lncRNAs were obtained. Furthermore, we detected the expression of the novel lncRNAs and ten highly expressed lncRNAs that were randomly selected through quantitative PCR (qPCR). The rat anterior pituitary lncRNA content identified in this study provides a more in-depth understanding of the roles of these lncRNAs in hormone and reproduction development and regulation in mammals.