SDS
Online Inquiry Add to Basket
Size
500T/1000T/5000T
Sample
host plants
Intended Use
The test can be used to detect WClMV in infected host plants.
Storage
All reagent components should be stored at the recommended temperature to assure their full shelf life. The kit should be used within six months of purchase.
Sensitivity
Sensitivity of the ELISA is moderate high. The virus can be consistently detected in infected plant tissues diluted at 1:810.
General Description
White clover mosaic virus (WClMV) is a plant pathogenic virus in the genus Potexvirus and the family Alphaflexiviridae. WClMV is a filamentous, flexuous rod, 480 nm in length and 13 nm wide.
The virus is a monopartite strand of positive-sense, single-stranded RNA surrounded by a capsid made from a single viral encoded protein. The genome has been completely sequenced and is 5845 nucleotides long. It is transmitted by mechanical inoculation, contact between plants and sometimes by seed (6% in Trifolium pretense). No insect vector is known.
Its major host is clover (Trifolium spp). It first reported in Trifolium repens in 1935. In the western United States and south western Canada it had been found in clover in a mixed infection with another potexvirus, Clover yellow mosaic virus. It is also known to infect peas (Pisum sativum), faba beans (Vicia faba), green beans (Phaseolus vulgaris), cowpea (Vigna unguiculata), cucumbers (Cucumis sativus), squash ( Cucurbita pepo ), and tomatoes (Lycopersicon esculentum).
This virus is believed to be distributed in temperate regions worldwide.
Standard Curve 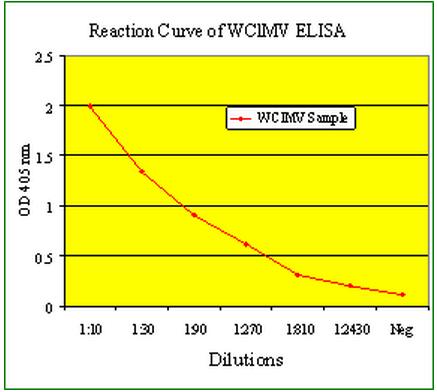 Have you cited DEIAPV301 in a publication? Let us know and earn a reward for your research.

Activities of enzymes involved in the detoxification of reactive oxygen species (catalase, glutathione reductase, peroxidase and superoxide dismutase (SOD)) were examined in the leaves of Phaseolus vulgaris L. var. Top Crop treated with plant hormones and infected with a non-lesion-forming isolate of white clover mosaic potexvirus (WClMV). The activities of catalase, glutathione reductase and SOD rapidly declined after infection while peroxidase activity was enhanced. These changes occurred before the rapid increase (5 days) in WClMV replication. A mild chlorosis appeared 7-10 days after inoculation but necrosis was never observed on inoculated leaves. Plants treated with dihydrozeatin, salicylic acid and jasmonic acid prior to WCIMV inoculation showed elevated catalase, glutathione reductase, and peroxidase activity, while SOD activities remained the same as in water-treated controls. These treatments all inhibited virus replication with enzyme activities remaining near control levels. We propose that a decline in free radical scavenging capacity may be required before a rapid increase in virus replication can take place. Treatments increasing the ability of the plant to scavenge reactive oxygen species may hinder virus replication. A possible role for reactive oxygen species as a requirement for virus replication is discussed.