SDS
Online Inquiry Add to Basket
Size
5000T
Sample
host plants
Intended Use
The test can be used to detect TuMV in infected host plants.
Storage
All reagent components should be stored at the recommended temperature to assure their full shelf life. The kit should be used within six months of purchase.
Sensitivity
Sensitivity of the ELISA is relatively high. The virus can be consistently detected in infected plant leaf tissues diluted at 1:810 - 1:2430.
General Description
Turnip mosaic virus (TuMV) is a Potyvirus of the family Potyviridae that causes diseases in cruciferous plants, among others. The virus is usually spread by 40-50 species of aphids in a non-persistent manner. Infected plants, especially the natural hosts, show symptoms such as chlorotic local lesions, mosaic, mottling, puckering or rugosity. TuMV is a positive-sense single stranded RNA virus, consisting of a non-enveloped, helical capsid that is filamentous and flexuous, with an average length of 720 nm. The TuMV genome is linear and monopartite (single particle). The virus has a thermal inactivation point (TIP) of 62°C, and longevity in vitro (LIV) of 3–4 days.
Standard Curve 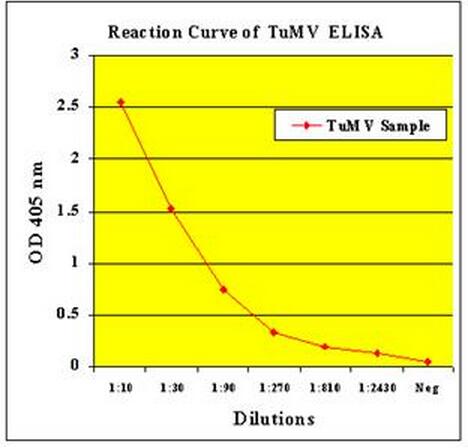 Have you cited DEIAPV289 in a publication? Let us know and earn a reward for your research.