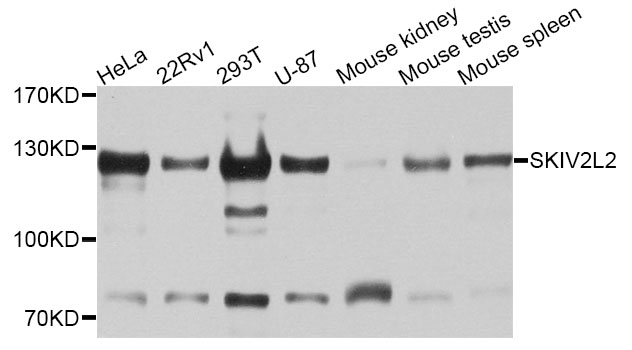 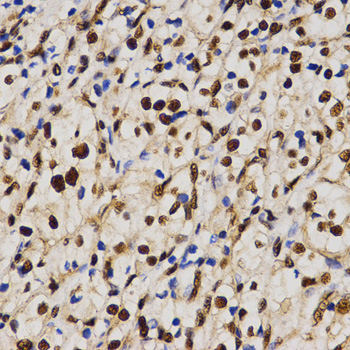 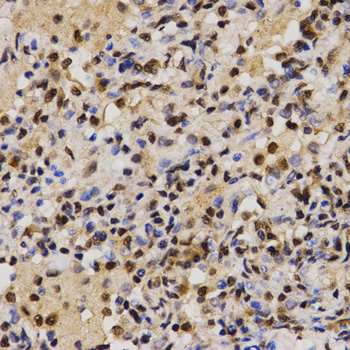 Application Notes
WB 1:500 - 1:2000
IHC 1:50 - 1:200
*Suggested working dilutions are given as a guide only. It is recommended that the user titrates the product for use in their own experiment using appropriate negative and positive controls.

Have you cited CABT-BL033 in a publication? Let us know and earn a reward for your research.

The poly(A)-binding protein nuclear 1 (PABPN1) is a ubiquitously expressed protein that is thought to function during mRNA poly(A) tail synthesis in the nucleus. Despite the predicted role of PABPN1 in mRNA polyadenylation, little is known about the impact of PABPN1 deficiency on human gene expression. Specifically, it remains unclear whether PABPN1 is required for general mRNA expression or for the regulation of specific transcripts. Using RNA sequencing (RNA-seq), we show here that the large majority of protein-coding genes express normal levels of mRNA in PABPN1-deficient cells, arguing that PABPN1 may not be required for the bulk of mRNA expression. Unexpectedly, and contrary to the view that PABPN1 functions exclusively at protein-coding genes, we identified a class of PABPN1-sensitive long noncoding RNAs (lncRNAs), the majority of which accumulated in conditions of PABPN1 deficiency. Using the spliced transcript produced from a snoRNA host gene as a model lncRNA, we show that PABPN1 promotes lncRNA turnover via a polyadenylation-dependent mechanism. PABPN1-sensitive lncRNAs are targeted by the exosome and the RNA helicase MTR4/SKIV2L2; yet, the polyadenylation activity of TRF4-2, a putative human TRAMP subunit, appears to be dispensable for PABPN1-dependent regulation. In addition to identifying a novel function for PABPN1 in lncRNA turnover, our results provide new insights into the post-transcriptional regulation of human lncRNAs.

Localization of a Novel RNA-binding Protein, SKIV2L2, to the Nucleus in the Round Spermatids of Mice

JOURNAL OF REPRODUCTION AND DEVELOPMENT

In our previous study (Kawashima et al., Biol Reprod 2009; 80: 1293-1304), we suggested that the first cycle of spermatogenesis recovered from busulfan-induced temporary arrest was a good model system to analyze the proteins expressed at the specific stages of spermatogenesis in the mouse, and this has been confirmed in the present paper. Namely, six-week-old mice were injected with busulfan at 20 mg/kg body weight. The germ cells except for the undifferentiated spermatogonia disappeared by 32 days after injection. The surviving spermatogonia started to proliferate, and spermatogenesis was entirely recovered about 77 days after injection. By proteome analysis of the busulfan-treated testis during the process of recovery of spermatogenesis, we identified a protein that was expected to be expressed in the spermatogenic cells as Superkiller viralicidic activity-2-like-2 (SKIV2L2). Skiv2l2 mRNA was found in the kidney, epididymis and heart as well as the testis. In the testis, Skiv2l2 mRNA was shown to be highly expressed in the spermatocytes at stages I to VI. On the other hand, SKIV2L2 protein was found to be predominantly localized in the nuclei of round spermatids. In accordance with the fact that SKIV2L2 belongs to the Ski2 family within the superfamily 2 of RNA helicases, it has been shown that SKIV2L2 has both the RNA-binding and ATPase activities.