SDS
Online Inquiry Add to Basket
Size
96T
Sample
cell culture lysates, enzymatic reactions
Species Reactivity
Human
Intended Use
CD's PGD2 ELISA Kit is a competitive assay that can be used for quantification of PGD2 in cell culture lysates and enzymatic reactions. The assay has a range from 19.5-2,500 pg/ml and a sensitivity (80% B/B0) of approximately 55 pg/ml.
Storage
This kit will perform as specified if stored as directed at -80°C and used before the expiration date indicated on the outside of the box.
Precision
The intra- and inter-assay CVs have been determined at multiple points on the standard curve.

Intra- and inter-assay variation
*%CV represents the variation in concentration (not absorbance) as determined using a reference standard curve.
+ Outside of the recommended usable range of the assay.
General Description
Prostaglandin D2 (PGD2) is biosynthesized in the brain by a soluble, 26 kDa glutathione-independent lipocalin-type PGD2 synthase.1 This PGD2 accumulates in the cerebrospinal fluid (CSF), where it induces physiologic sleep in rats and humans.2 PGD2 is also synthesized in mast cells and leukocytes by a cellular, myeloid-type, glutathione-dependent PGD synthase. This PGD2 which is formed in the intracellular and vascular compartments is rapidly metabolized to 11β-PGF2α.3 Thus, plasma measurements of PGD2 synthesis are most appropriately focused on the measurement of 11β-PGF2α.
 Measurement of the parent eicosanoid PGD2 is appropriate in cell culture lysates and in CSF, where concentrations of several hundred pg/ml have been measured.4
All studies of PGD2 biosynthesis should take into consideration the chemical instability of PGD2 and its rapid degradation in the presence of serum proteins such as albumin. PGD2 also readily degrades in both acidic and basic media to give a variety of decomposition products including PGJ2, Δ12-PGJ2, and 15-deoxy-Δ12,14-PGJ2. For these reasons, antibodies against PGD2 have generally been prepared against conjugates of a stable methoximine derivative (i.e., PGD2-MOX). Our PGD2-MOX and PGD2-MOX Express ELISA Kits are based on this chemistry and require the PGD2 in all samples to be converted to the stable methoximine derivative prior to performing the assay. These assays are well suited and recommended for the measurement of PGD2 in complex matrices. The antibody utilized in this PGD2 ELISA was generated in a unique way allowing the direct measure of PGD2 without prior conversion to the methoximine compound.

Biochemistry of Acetylcholinesterase
The electric organ of the electric eel, E. electricus, contains an avid AChE capable of massive catalytic turnover during the generation of its electrochemical discharges. The electric eel AChE has a clover leaf-shaped tertiary structure consisting of a triad of tetramers attached to a collagen-like structural fibril. This stable enzyme is capable of high turnover (64,000 s-1) for the hydrolysis of acetylthiocholine.
A molecule of the analyte covalently attached to a molecule of AChE serves as the tracer in AChE enzyme immunoassays. Quantification of the tracer is achieved by measuring its AChE activity with Ellman's Reagent. This reagent consists of acetylthiocholine and 5,5'-dithio-bis-(2-nitrobenzoic acid). Hydrolysis of acetylthiocholine by AChE produces thiocholine. The non-enzymatic reaction of thiocholine with 5,5'-dithio-bis-(2-nitrobenzoic acid) produces 5-thio-2-nitrobenzoic acid, which has a strong absorbance at 412 nm (ε = 13,600).
AChE has several advantages over other enzymes commonly used for enzyme immunoassays. Unlike horseradish peroxidase, AChE does not self-inactivate during turnover. This property of AChE also allows redevelopment of the assay if it is accidentally splashed or spilled. In addition, the enzyme is highly stable under the assay conditions, has a wide pH range (pH 5-10), and is not inhibited by common buffer salts or preservatives. Since AChE is stable during the development step, it is unnecessary to use a 'stop' reagent, and the plate may be read whenever it is convenient. 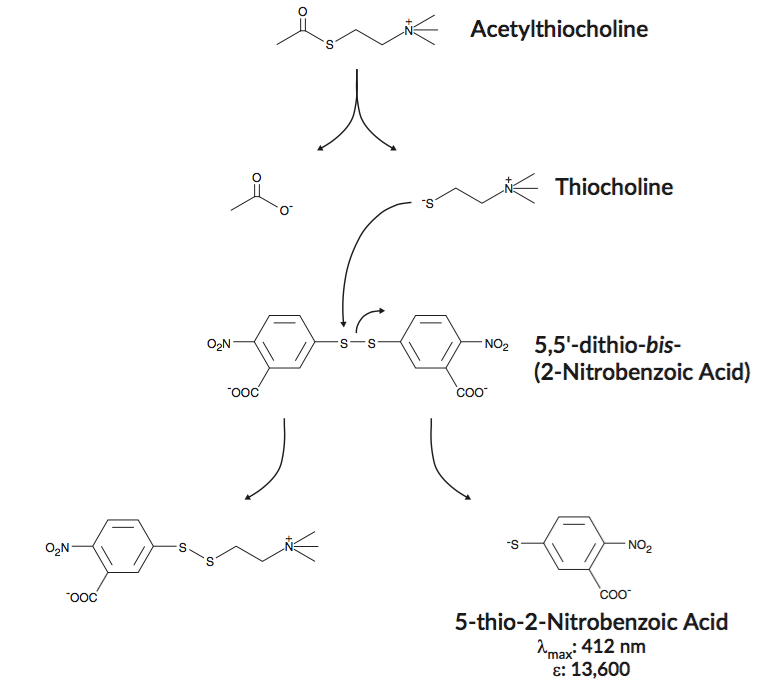 Have you cited DEIA5036 in a publication? Let us know and earn a reward for your research.