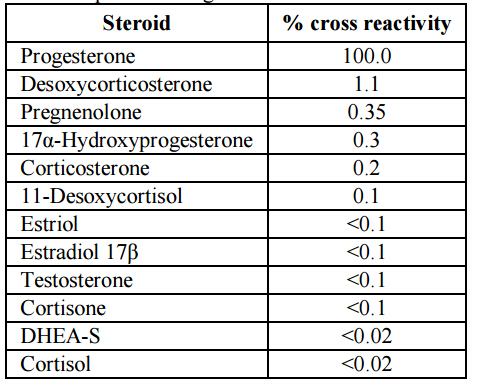 Sensitivity
The lowest detectable level of progesterone that can be distinguished from the Zero Standard is 3.8 pg/mL at the 95 % confidence limit.

Reproducibility
Intra-Assay
The intra-assay variation was determined by 20 replicate measurements of 5 saliva samples within one run. The withinassay variability is shown below:

Inter-Assay
The inter-assay (between-day) variation was determined by duplicate measurements of 5 saliva samples over 10 days.

Inter-Lot
The Inter-Lot (between-lot) variation was determined by triplicate measurements of five saliva samples in three different kit lots. The between lot variability is shown below:

Recovery
Recovery of the Progesterone ELISA was determined by adding increasing amounts of the analyte to five different saliva samples containing different amounts of endogenous analyte. Each sample (native and spiked) was assayed and analyte concentrations of the samples were calculated from the standard curve. The percentage recoveries were determined by comparing expected and measured values of the samples.

Linearity
In total six saliva samples containing different amounts of analyte were serially diluted with Standard 0 and assayed with the ELISA Kit. Three of these samples were serially diluted directly, and the other 3 samples at first were spiked with progesterone and then serially diluted up to 1:128. The percentage recovery was calculated by comparing the expected and measured values for progesterone. A linearity of 3.8 - 4600 pg/mL has been identified as the usable range for this assay. Samples above this range must be diluted and re-run.

Comparison Studies
A study was performed that evaluated 306 saliva samples collected from adult men and women ages 20 - 75. The samples were run on the test and a commercially available LIA method to determine the concentration of free progesterone in the saliva samples. A correlation of 0.9373 and regression formula of y = 0.912x + 6.066 was obtained versus this method. An additional study was performed using 101 saliva samples from adult men and women ages 20 - 75. These samples were compared to the LIA method, and yielded a correlation of r = 0.9923 with the following regression formula. 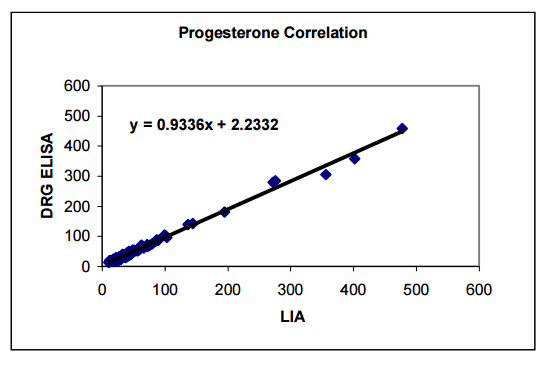 General Description
Progesterone (4-pregnene-3, 20-dione) is a C21 steroid hormone containing a keto-group (at C-3) and a double bond between C-4 and C-5. Like other steroids, it is synthesized from cholesterol via a series of enzyme-mediated steps. The steroid hormone Progesterone is a female sex hormone which, in conjunction with estrogens, regulates the accessory organs during the menstrual cycle and it is particularly important in preparing the endometrium for the implantation of the blastocyte and in maintaining pregnancy In non-pregnant women progesterone is mainly secreted by the corpus luteum whereas in pregnancy the placenta becomes the major source. Minor sources for progesterone are the adrenal cortex for both sexes and the testes for males. The Progesterone level in saliva represents the concentration of the active free Progesterone.
Standard Curve
Standard Absorbance Units (450 nm)
Standard 0 (0 pg/mL) 1.89
Standard 1 (10 pg/mL) 1.71
Standard 2 (50 pg/mL) 1.54
Standard 3 (100 pg/mL) 1.39
Standard 4 (500 pg/mL) 0.95
Standard 5 (1000 pg/mL) 0.71
Standard 6 (5000 pg/mL) 0.44
Reconstitution And Storage
When stored at 2°C to 8°C unopened reagents will retain reactivity until expiration date. Do not use reagents beyond this date. Opened reagents must be stored at 2°C to 8°C. Microtiter wells must be stored at 2°C to 8°C. Once the foil bag has been opened, care should be taken to close it tightly again. Opened kits retain activity for two months if stored as described above.

Have you cited DEIA-XY2274 in a publication? Let us know and earn a reward for your research.