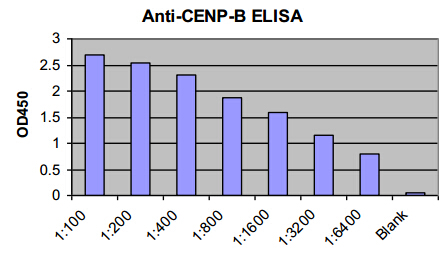 Have you cited DEIA118J in a publication? Let us know and earn a reward for your research.

Centromere protein B (CENP-B) binds constitutively to mammalian centromere repeat DNA and is highly conserved between humans and mouse. Cenpb null mice appear normal but have lower body and testis weights. We demonstrate here that testis-weight I eduction is seen in male null mice generated on three different genetic backgrounds (denoted R1, W9.5, and Cn), whereas body-weight reduction is dependent on the genetic background as well as the gender of the animals. In addition, Cenpb null females show 31%, 33%, and 44% reduced uterine weights on the RI, W9.5, and C57 backgrounds, respectively. Production of "revertant" mice lacking the targeted frameshift mutation but not the other components of the targeting construct corrected these differences, indicating that the observed phenotype is attributable to Cenpb gene disruption rather than a neighbouring gene effect induced by the targeting construct. The R1 and W9.5 Cenpb null Females are reproductively competent but show age-dependent reproductive deterioration leading to a complete breakdown at or before 9 months of age. Reproductive dysfunction is much more severe in the C57 background as Cenpb null females are totally incompetent or are capable of producing no more than one litter. These results implicate a further genetic modifier effect on female reproductive performance. Histology of the uterus reveals normal myometrium and endometrium but grossly disrupted luminal and glandular epithelium. Tissue in situ hybridization demonstrates high Cenpb expression in the uterine epithelium of wild-type animals. This study details the first significant phenotype of Cenpb gene disruption and suggests an important role of Cenpb in uterine morphogenesis and function that may have direct implications for human reproductive pathology.

Efficient reprograming of the donor cell genome in nuclear transfer (NT) embryos is linked to the ability of the embryos to sustain full-term development. As the nuclear architecture has recently emerged as a key factor in the regulation of gene expression, we questioned whether early bovine embryos obtained from transfer of cultured fibroblasts into enucleated oocytes would adopt an embryo-like nuclear organization. We studied the dynamics of constitutive heterochromatin in the stages prior to embryonic genome activation by distribution analysis of heterochromatin protein CBX1 (HP1), centromeric proteins CENPA and CENPB, and histone H3 three-methylated at lysine 9. Then we applied descriptive, quantitative, and co-localization analyses. A dramatic reorganization of heterochromatic blocks of somatic donor cells was first observed in the late one-cell stage NT embryos. Then at two- and four-cell stages, we found two types of NT embryos: One displaying noncondensed heterochromatin patches similar to IVF embryos, whereas the second type displayed condensed heterochromatin blocks, normally observed in IVF embryos only after the eight-cell stage. These analyses discriminate for the first time two contrasted types of nuclear organization in NT embryos, which may correspond to different functional states of the nuclei. The relationship with the somatic nucleus reprograming efficiency is discussed. Reproduction (2010) 139 129-137