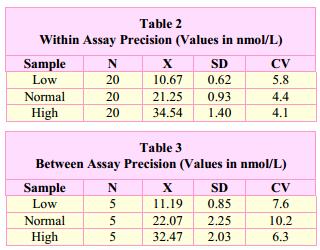 Sensitivity
The sTfR Microplate ELISA Test System has a sensitivity of 0.055 nmol/L. The sensitivity was ascertained by determining the variability of the 0 nmol/L serum calibrator and using the 2 σ (95% certainty) statistic to calculate the minimum dose.
General Description
The Soluble Transferrin Receptor (sTfR) has been introduced as a promising new diagnostic tool for differentiating between iron deficiency anemia (IDA) and anemia of chronic disease (ACD). The circulating sTfR concentration is proportional to cellular expression of the membrane-associated TfR and increases with increased cellular iron needs and cellular proliferation. Furthermore, because serum ferretin reflects the storage iron compartment and sTfR reflects the functional iron compartment, the sTfR/log ferritin index (sTfR-F-inde values, and has been suggested as a good estimate of body iron compared with the sTfR/ferrin ratio. Distinguishing between IDA and ACD is a key step for determining whether iron supplementation would be beneficial.

As well as helping identify iron deficiency, sTfR is useful for monitoring erythropoiesis in malignancy and chronic renal disease. Development of erythropoiesis following bone marrow or stem cell transplantation is determined by the overall marrow proliferative capacity, which can be monitored with sTfR. During the aplastic period prior to transplantation, sTfR levels decline. Once erythropoiesis has recovered, sTfR levels return to normal values. In anemia of chronic renal failure, the early increase in sTfR values starting recombinant human erythropoietin therapy is useful for predicting and assessing hematologic response to therapy. The change in sTfR levels occurs well before any change in hematocrit or hemoglobin values can be detected, allowing early adjustments in erythropoietin dosage and iron supplementation therapy.

sTfR and the sTfR/ferritin ratio also appear to have other useful application. A recent study indicated that the sTfR/ferritin ratio can discriminate between anemic patients with and without celiac disease. Subclinical iron deficiency in early pregnancy is strongly associated with bacterial vaginosis, and therefore sTfR and the sTfR/log ferritin index also might have a role in highlighting the risk of this condition. The sTfR/log ferritin index has also been shown to be superior to routine tests for predicting the response to iron therapy in long-term hemodialysis patients, and in discriminating between patients with iron deficiency and various hemoglobinnopathies. Serum sTfR also reflects the rate of erythroid proliferation and iron demand but as sTfR is not an acute phase reactant it is unaffected by inflammatory process. sTfR is therefore a useful addition to the existing anemia assays.

Have you cited DEIA1927 in a publication? Let us know and earn a reward for your research.