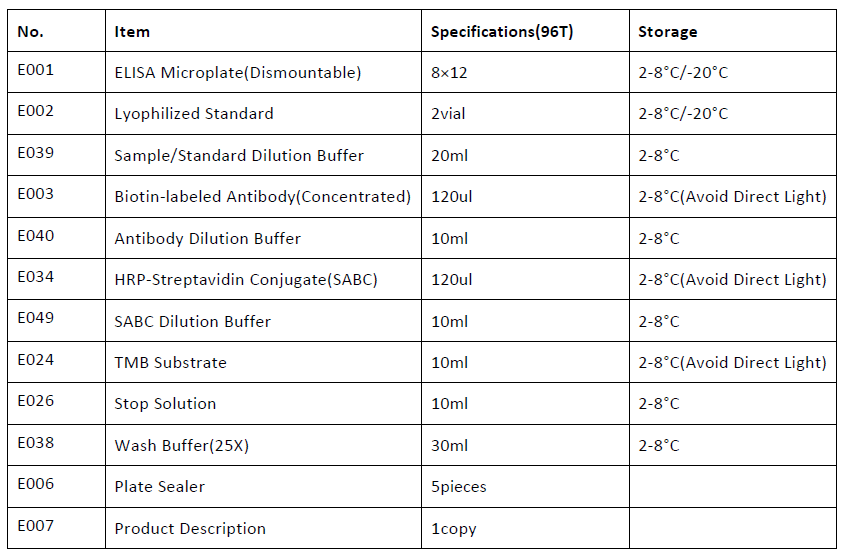 Storage
2-8°C for 6 months
Precision
Intra-Assay: CV<8%
Inter-Assay: CV<10%
Detection Range
15.625-1000pg/ml
Sensitivity
< 9.375pg/ml
Standard Curve
Results of a typical standard operation of a CTF1 ELISA Kit are listed below. This standard curve was generated at our lab for demonstration purpose only. Users shall obtain standard curve as per experiment by themselves. (N/A=not applicable) 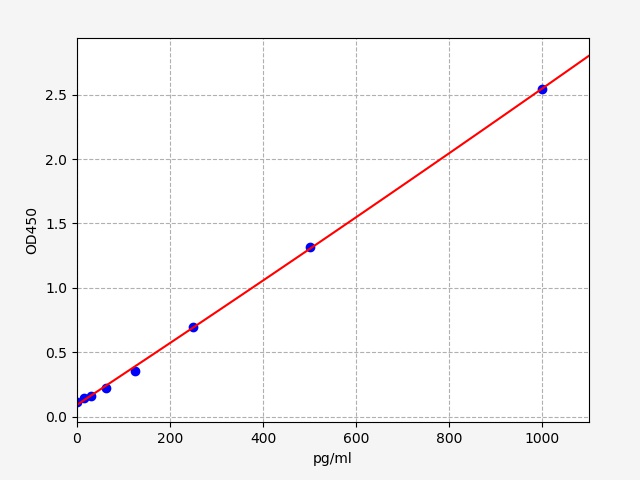 Have you cited DEIA7845 in a publication? Let us know and earn a reward for your research.

Bilateral lesions of the central tegmental field (CTF) in male rats virtually eliminate mating behavior. This study examined if mating-induced Fos expression (a measure of neuronal activation) and androgen receptors (AR) are colocalized in brain and spinal cord neurons which project to the CTF. Animals received unilateral injections of the retrograde tracer Fluorogold (FG) in the lateral part of the CTF (CTF1), and 10 days later were killed after ejaculating with females. Brains and spinal cords were examined for FG transport, AR-immunoreactivity (AR-ir), and Fos-immunoreactivity (Fos-ir). AR-ir and Fos-ir were visualized with fluorescence microscopy using cyanine-conjugated and fluorescein-conjugated secondary antibodies. The CTF1 received projections from AR-containing neurons in forebrain structures (bed nucleus of stria terminalis, medial preoptic area, lateral and ventromedial hypothalamus), in the central amygdala and various mid- and hindbrain structures (dorsolateral tegmentum, superior and inferior colliculi, pedunculopontine nucleus), and in the lumbosacral spinal cord (lamina X). Some of the AR-containing neurons in bed nucleus of stria terminalis and in the dorsal part of the medial preoptic area with projections to the CTF1 were activated by mating. Most AR-containing neurons in spinal lamina X with projections to the CTF1 were also activated by mating. Information from spinal cord and pontine nuclei and from outputs descending from the forebrain may be relayed in the CTF1. Thus, as part of a network of hormone-sensitive neurons linking brain and spinal cord mechanisms for mating, the CTF1 could participate in the integration of visceral and somatic information relevant for sexual behavior. J. Comp. Neurol. 408:220-236, 1999. (C) 1999 Wiley-Liss, Inc.

Background: Streptococcus suis is an emerging micro-organism responsible for causing meningitis, septicemia, arthritis, endocarditis and pneumonia, in addition to being an occupational zoonosis. In healthy pigs S. suis is located asymptomatically in the tonsils and may be disseminators sources pigs susceptible to the pathogen. To reduce these losses it is necessary to have effective control and treatment agent, however, it is known that antimicrobial resistance is a risk point for the success of the therapy. Thus, the aim of this study was to determine the resistance profile and the minimum inhibitory concentration of antimicrobial isolates of Streptococcus suis type 2 from tonsils of pigs at slaughter. Materials, Methods & Results: Tonsil samples from 302 slaughtered pigs were from three slaughterhouses, they were isolated and typified 219 S. suis type 2. The antibiogram was performed using the technique of Disk Diffusion and Agar 209 isolates in the following antimicrobials were tested: amoxicillin (10 mu g), ampicillin (10 mcg), ceftiofur (30 mcg), ciprofloxacin (5 mu g), doxycycline (30 mcg), enrofloxacin (5 mcg), erythromycin (15 mu g), florfenicol (30 mcg), norfloxacin (10 mu g), penicillin G (10 U) and tetracycline (30 mu g). And 117 isolates were subjected to minimum inhibitory concentration (MIC), the following concentrations amoxicillin, doxycycline, enrofloxacin in concentrations of 10, 20 and 30 mu g and penicillin/spectinomycin 20, 40 and 60 IU. The antimicrobials that showed higher resistance were tetracycline and erythromycin. Most drugs got low resistance (< 10%) as amoxicillin, ceftiofur, enrofloxacin, ampicillin, doxycycline and florfenicol compared to the drug norfloxacin, penicillin and ciprofloxacin, which showed more resistance (17-30.4%). The resistance of isolates by antibiogram was AMO 0%, AMP 5%, CTF1.5%, CIP 17.3%, DOX 5%, ENO 3.9%, ERI 76.9%, FLF 6.1%, NOR 30.4%, PEN 17% and TET 90.2%. In determining the MIC no isolate was resistant to amoxicillin and penicillin/spectinomycin, doxycycline for 23.9% (28/117) obtained an MIC > 10 mu g, 1.7% (2/117) MIC > 20 mu g and 0.85% (1/117) MIC > 30 mu g enrofloxacin and 5.9% (7/117) obtained an MIC > 10 mu g. Discussion: Antimicrobial resistance is an important factor to be considered in the treatment of bacterial diseases, some pathogens are resistant to a wide range of drugs. This may be due to the inappropriate use of antimicrobials, especially those used as growth promoters, leading to increased incidence of bacterial resistance. The high degree of resistance to tetracycline (90.2%) and erythromycin (76.9%) observed in our study can be explained by its use in the prevention and treatment of disease without an effective control. Errors can easily occur leading to underdosing of antibiotics that lead to selection of resistant strains. However high sensibility to the group of beta-lactams, quinolones and florfenicol were found, with amoxicillin and ceftiofur antimicrobials, showing greater sensitivity. These antimicrobial classes are widely used in the prophylaxis and therapy of diseases, however the high sensitivity suggests that not exert high selection pressure to S. suis. In the MIC technique, antimicrobials showed low resistance, suggesting that they are due to the higher concentrations tested in this technique when compared with the antibiogram. These results demonstrate that amoxicillin and ceftiofur are less antimicrobial resistance profile, differing tetracycline and erythromycin which showed increased resistance to antimicrobials tested.