Inter Assay Precision
Three human samples were diluted with Assay Buffer and run in duplicates in thirteen assays run over multiple days by four operators. The mean and precision of the calculated Estradiol concentrations were:

Detection Limit
26.5 pg/mL
Sensitivity
39.6 pg/mL
General Description
17 β-Estradiol, C18H24O2, also known as E2 or oestradiol (1, 3, 5(10)-Estratrien-3, 17 β-diol) is a key regulator of growth, differentiation, and function in a wide array of tissues, including the male and female reproductive tracts, mammary gland, brain, skeletal and cardiovascular systems. The predominant biological effects of E2 are mediated through two distinct intracellular receptors, ERa and ERβ, each encoded by unique genes possessing the functional domain characteristics of the steroid/thyroid hormone superfamily of nuclear receptors. ERa is the predominant form expressed in the breast, uterus, cervix, and vagina. ERβ exhibits a more limited pattern and is primarily expressed in the ovary, prostate, testis, spleen, lung, hypothalamus, and thymus. Estradiol also influences bone growth, brain development and maturation, and food intake, and it is also critical in maintaining organ functions during severe trauma. In plasma, estradiol is bound to serum proteins such as albumin and sex hormone-binding globulin. Just over 2% of E2 is free and biologically active, the percentage remaining constant throughout the menstrual cycle. Estradiol is conjugated in the liver to sulfate and glucuronide derivatives and excreted. Deactivation includes conversion to less-active estrogens, such as estrone and estriol. Estriol is the major urinary metabolite.
Standard Curve 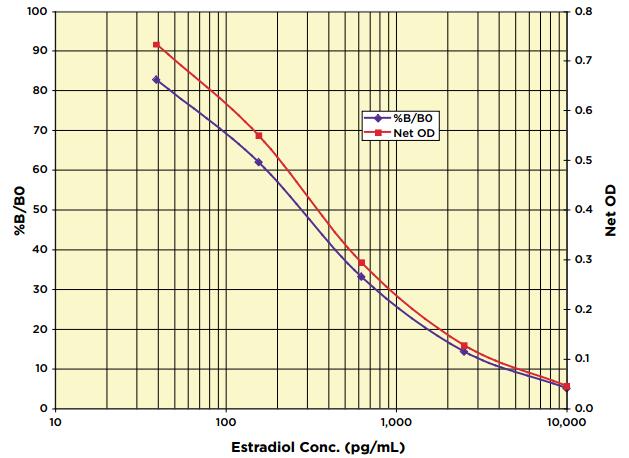 Have you cited DEIABL248 in a publication? Let us know and earn a reward for your research.