Detection Range
2 - 200 U/ml
General Description
Infectious mononucleosis is an acute lymphoproliferative disease that is common in children and young adults and is caused by the Epstein-Barr virus (EBV). The EBV is one of the herpes viruses 4 (gamma).
Characteristic clinical features include:

4% of infected young adults show an icteric manifestation and 50% have splenomegaly. In addition, EBV is implicated in nasopharyngeal carcinoma, Burkitt lymphoma and Hodgkin´s disease.
An infectious mononucleosis similar syndrome can be caused by cytomegalovirus, toxoplasmosis and other viral infection; differential diagnosis depends on laboratory results, with only EBV stimulating the production of heterophil antibodies.
EBV is present in saliva of patients with acute infectious mononucleosis, and excretion of the virus from the oropharynx, which persists for several months after the outbreak of the disease, is one of the major ways of virus transmission. Infected persons keep the Epstein-Barr virus for lifetime, but are mostly asymptomatic. In developing countries practically the whole population is infected; in western countries prevalence is about 80 – 90%. Transmission, possibly from the mother, already takes place at child's age and mainly via saliva.
Of great importance for diagnosis is the detection of an increase in relative and absolute number of lymphocytes and atypical lymphocytes. During the disease 50 – 60% of leukocytes in the peripheral blood can be lymphatic cells, of which normally 10% are atypical lymphocytes. In addition, abnormal liver function tests and high titers of heterophil antibodies are seen.
Serological tests like ELISA are very useful for the detection of anti-EBV antibodies, especially if heterophil antibodies are absent. The different stages of an EBV infection (acute, reactivated, past) are characterized by the appearance of different antibodies (IgA, IgG, IgM) against different viral antigens (virus capsid antigen = VCA, early antigen = EA and Epstein-Barr virus nuclear antigen = EBNA).
The six parameters produced by CD (VCA IgA / IgG / IgM, EA IgA / IgG und EBNA IgG) enable to detect and differentiate all stages of an EBV infection. A well directed selection of antigens for CD EBV ELISAs results in an extraordinary sensitivity and specificity for the diagnosis of acute diseases and for the detection of past infections.
The assays for the detections of antibodies against EA and EBNA use highly specific recombinant antigens – EA p54 antigen expressed in E. coli and EBNA-1 p72 antigen expressed in Sf9 cells; affinity purified VCA gp125 from P3HR1 cells is responsible for the high sensitivity of the VCA ELISAs.
This selection of antigens together with a purposeful regulation of assay characteristics results in a clear distinction between positive and negative samples, i.e. a small grey zone.
The very high sensitivity of the VCA IgA assay and the 100% specificity of the EA IgA ELISA are of particular importance; the combination of these two assays allows the correct detection of reactivated infections with extremely high reliability.
The ?-capture principle applied for the VCA IgM assay results in a higher specificity compared to IgM ELISAs following the sandwich principle, i.e. false positive results are minimized.
Information about antibody combinations that are typical for the different stages of an infection is given in chapter PERFORMANCE.
Standard Curve 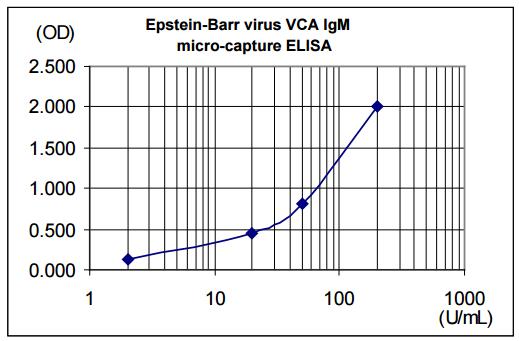 Have you cited DEIABL337 in a publication? Let us know and earn a reward for your research.

Lymphotropic Viruses EBV, KSHV and HTLV in Latin America: Epidemiology and Associated Malignancies. A Literature-Based Study by the RIAL-CYTED

The Epstein-Barr virus (EBV), Kaposi sarcoma herpesvirus (KSHV) and human T-lymphotropic virus (HTLV-1) are lymphomagenic viruses with region-specific induced morbidity. The RIAL-CYTED aims to increase the knowledge of lymphoma in Latin America (LA), and, as such, we systematically analyzed the literature to better understand our risk for virus-induced lymphoma. We observed that high endemicity regions for certain lymphomas, e.g., Mexico and Peru, have a high incidence of EBV-positive lymphomas of T/NK cell origin. Peru also carries the highest frequency of EBV-positive classical Hodgkin lymphoma (HL) and EBV-positive diffuse large B cell lymphoma, not otherwise specified (NOS), than any other LA country. Adult T cell lymphoma is endemic to the North of Brazil and Chile. While only few cases of KSHV-positive lymphomas were found, in spite of the close correlation of Kaposi sarcoma and the prevalence of pathogenic types of KSHV. Both EBV-associated HL and Burkitt lymphoma mainly affect young children, unlike in developed countries, in which adolescents and young adults are the most affected, correlating with an early EBV seroconversion for LA population despite of lack of infectious mononucleosis symptoms. High endemicity of KSHV and HTLV infection was observed among Amerindian populations, with differences between Amazonian and Andean populations.

Despite comparable outcomes of haploidentical transplants (Haplo-HSCT) with HLA-matched unrelated transplants (MUD-HSCT) in retrospective comparisons, few studies have prospectively compared Haplo-HSCT with MUD-HSCT in AML. Here, we prospectively compared the outcomes of Haplo-HSCT with MUD-HSCT for AML in remission (n = 110) to prove non-inferiority of overall survival in Haplo-HSCT. Both groups were well balanced in factors related to biological features of AML and measurable residual disease (MRD) status by Wilms' tumor gene 1 (WT1) assay. A unique, reduced-toxicity preparative regimen was used for Haplo-HSCT, whereas mostly-myeloablative regimen was for MUD-HSCT. Both groups showed similar patterns of neutrophil and platelet recovery, whereas delayed T-cell reconstitution in Haplo-HSCT was found compared with MUD-HSCT. No significant differences were found in acute or chronic graft-vs-host-disease (GVHD) and post-transplant infectious events with an exception of EBV or CMV infection, which occurred more frequently in Haplo-HSCT. After a median follow-up of 47 months, no significant differences in overall survival (65% vs 54%, P = .146), disease-free survival (67% vs 53%, P = .142), relapse (20% vs 21%, P = .858), non-relapse mortality (14% vs 26%, P = .103), or GVHD-free/relapse-free survival (54% vs 41%, P = .138) were observed for Haplo-HSCT vs MUD-HSCT. In multivariate analysis, WT1 expression before transplantation independently predicted relapse, resulting in inferior survival. Separate analysis of unenrolled patients (n = 110) who were excluded or refused to participate in this study showed consistent results with enrolled patients. This prospective study demonstrated the non-inferiority of Haplo-HSCT to MUD-HSCT for AML in remission, and validated the role of WT1 quantification as an MRD marker (ClinicalTrial.gov identifier: NCT01751997).