SDS
Online Inquiry Add to Basket
Size
96T
Sample
serum
Species Reactivity
Human
Intended Use
The Dengue Early ELISA is a dengue NS1 antigen capture ELISA. It is for the qualitative detection of NS1 antigen in serum, used as an aid in the clinical laboratory diagnosis of patients with clinical symptoms consistent with dengue fever. The Dengue Early ELISA should be used in conjunction with other dengue serology.
Contents of Kit
1. Anti-NS1 Antibody Coated Microwells
2. HRP Conjugated Anti-NS1 MAb
3. Wash Buffer Concentrate
4. Serum Diluent 3
5. Tetramethylbenzidine TMB
6. Positive Control
7. Calibrator
8. Negative Control
9. Stop Solution
Storage
Store the kit at 4°C upon receipt. For more detailed information, please download the following document on our website.
Performance Characteristics
Two hundred and fifty six (256) retrospective sera from individuals of various ages and both genders were tested on the Dengue Early ELISA as part of an in-house study. The sera included samples from the following groups: 69 endemic negative specimens from Thailand, 144 non-endemic negative specimens from Australia and the USA and 43 positive specimens from patients in Honduras and Thailand with early dengue infection. These samples were masked and tested on Dengue Early ELISA. The results were compared as the positive and negative agreement to a commercially available dengue NS1 antigen detection assay.The data is summarised in Table 1.
Table 1 Sensitivity and Specificity of Dengue Early ELISA 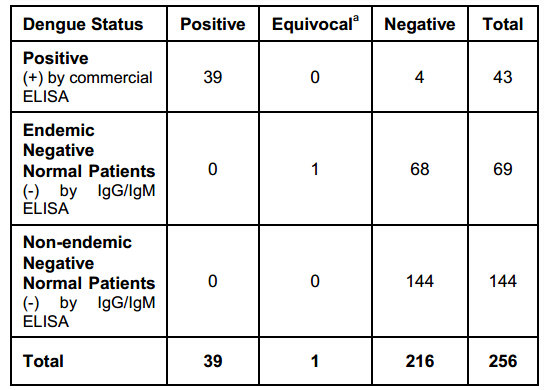 95% CI*
Patients with early dengue infections
Positive Presumptive
Agreement = 39/43 = 90.7% 77.9-97.4%
Normal Patients (Endemic and Non-Endemic)
Negative Presumptive
Agreementb = 212/212 = 100.0% 98.3-100.0%
Total Agreement = 251/255 = 98.4% 96.0-99.6%
*Confidence Interval.
a Retesting of equivocal sample was not conducted.
b Equivocal not included as retesting was not conducted.
CROSS-REACTIVITY
A panel of 95 specimens from patients with confirmed diseases other than dengue was tested to establish the analytical specificity of the Dengue Early ELISA. The specimens were from patients with diseases that have potential for crossreactivity. Each of the specimens included in the study was characterised with respect to disease diagnosis prior to analysis with the Dengue Early ELISA. Minimal crossreactivity was observed across 95 specimens. Refer to Table 3 for a summary of results. 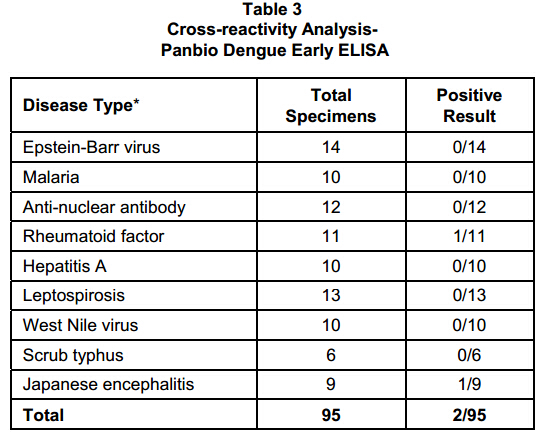 General Description
Dengue virus is a flavivirus found largely in areas of the tropics and sub-tropics. Over half the world's population lives in regions at risk of potential dengue transmission, making dengue the most important arboviral disease in humans, in terms of morbidity and mortality. There are four distinct but antigenically related serotypes of dengue viruses, and transmission is by mosquito, principally Aedes aegypti, Aedes polynesienses and Aedes albopictus.
The clinical manifestations ofranging from sub-clinical through to fatal. The disease is graded dengue virus infection are varied, according to severity as follows: non-specific febrile illness, classic dengue fever, dengue haemorrhagic fever (DHF) (grades I and II), and dengue shock syndrome (DSS) (grades III and IV). Classic dengue fever is characterised by the sudden onset of fever with two or more symptoms of: headache, retro-orbital pain, myalgia, arthralgia, rash, haemorrhagic manifestations or leukopenia. A diphasic febrile course is common as is insomnia and anorexia with loss of taste or bitter taste. DHF and DSS are severe, potentially fatal complications often associated with infection by a second serotype.
Detection of dengue NS1 antigen by ELISA is a valuable procedure, as it allows detection of infection prior to seroconversion. NS1 antigen can be detected in serum from day 1 after onset of fever and up to day 9. This compares to IgM antibodies that are not detectable until days 3-5. Earlier diagnosis of dengue allows earlier implementation of supportive therapy and monitoring. This reduces risk of complications such as dengue haemorrhagic fever or dengue shock syndrome, especially in countries where dengue is endemic.

Have you cited DEIA-CL019 in a publication? Let us know and earn a reward for your research.

Diagnostic tools used in the evaluation of acute febrile illness in South India: a scoping review

Background Acute febrile illness (AFI) is characterized by malaise, myalgia and a raised temperature that is a nonspecific manifestation of infectious diseases in the tropics. The lack of appropriate diagnostics for the evaluation of AFI leads to increased morbidity and mortality in resource-limited settings, specifically low-income countries like India. The review aimed to identify the number, type and quality of diagnostics used for AFI evaluation during passive case detection at health care centres in South India. Methods A scoping review of peer-reviewed English language original research articles published between 1946-July 2018 from four databases was undertaken to assess the type and number of diagnostics used in AFI evaluation in South India. Results were stratified according to types of pathogen-specific tests used in AFI management. Results The review included a total of 40 studies, all conducted in tertiary care centres (80% in private settings). The studies demonstrated the use of 5-22 tests per patient for the evaluation of AFI. Among 25 studies evaluating possible causes of AFI, 96% tested for malaria followed by 80% for dengue, 72% for scrub typhus, 68% for typhoid and 60% for leptospirosis identifying these as commonly suspected causes of AFI. 54% studies diagnosed malaria with smear microscopy while others diagnosed dengue, scrub typhus, typhoid and leptospirosis using antibody or antigen detection assays. 39% studies used the Weil-Felix test (WFT) for scrub typhus diagnosis and 82% studies used the Widal test for diagnosing typhoid. Conclusions The review demonstrated the use of five or more pathogen-specific tests in evaluating AFI as well as described the widespread use of suboptimal tests like the WFT and Widal in fever evaluation. It identified the need for the development of better-quality tests for aetiological diagnosis and improved standardised testing guidelines for AFI.

Canine bufavirus (CBuV) is a protoparvovirus, genetically related to human and non-human primate bufaviruses and distantly related to canine parvovirus type 2 (CPV-2). CBuV was initially identified from young dogs with respiratory signs but subsequent studies revealed that this virus is also a common component of the canine enteric virome. In this survey, by assessing archival and recent collections of dogs faecal samples, CBuV DNA was detected with a higher prevalence rate (8.8%) in animals with enteritis than in control animals (5.0%), although this difference was not statistically significant. The rate of co-infections with other enteric viruses in diarrhoeic dogs was high (84.6%), mostly in association with canine parvovirus CPV-2 (90.1%). The complete ORF2 gene was determined in five samples, and the nearly full-length genome was reconstructed for three strains, 62/2017/ITA, 9AS/2005/ITA and 35/2018/ITA. Upon sequence comparison, the viruses appeared highly conserved in the NS1 (97.2%-97.9% nt and 97.5%-98.1% aa identities). In the complete VP2 coding region, three strains were similar to the prototype viruses (99.7-99.8 nt and 99.6%-99.8% aa) whilst strains 9AS/2005/ITA and 35/2016/ITA were distantly related (87.6%-89.3% nt and 93.9%-95.1% aa identities). Interestingly, genetic diversification occurred downstream conserved regions such as the VP1/VP2 splicing signals and/or the G-rich motif in the N terminus of the VP2, suggesting a potential recombination nature. Upon phylogenetic analysis, the two divergent CBuV strains formed a distinct cluster/genotype.