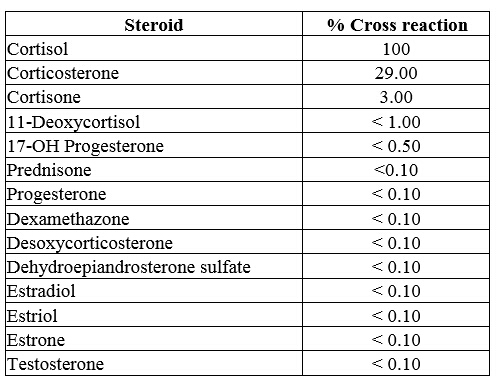 Sensitivity
The lowest detectable level of Cortisol that can be distinguished from the Zero Standard is 0.537 ng/mL or 0.0537 µg/dL at the 95 % confidence limit.

Reproducibility
Intra-Assay
The intra-assay variation was determined by replicate measurements of 4 saliva samples using this ELISA kit. The within assay variability is shown below:

Inter-Lot
The Inter-Lot (between-lot) variation was determined by duplicate measurements of five saliva samples in three different kit lots. The between run variability is shown below:

Recovery
Recovery of the ELISA Kit was determined by adding increasing amounts of the analyte to three different saliva samples containing different amounts of endogenous analyte. Each sample (non-spiked and spiked) was assayed and analyte concentrations of the samples were calculated from the standard curve. The percentage recoveries were determined by comparing expected and measured values of the samples. 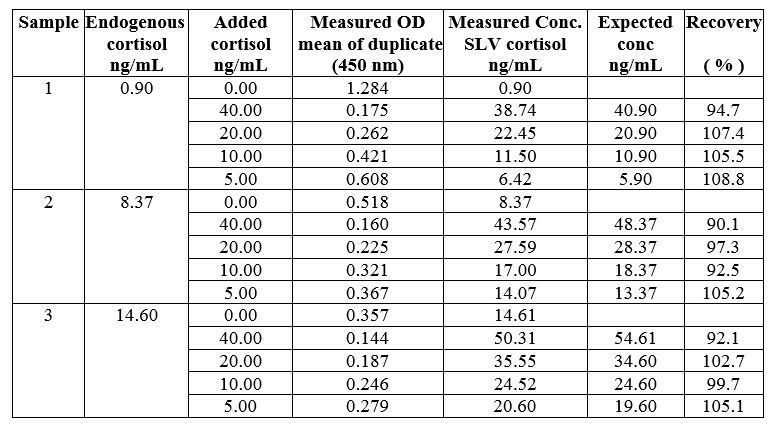 Linearity
Three samples (saliva) containing different amounts of analyte were serially diluted to 1:64 with zero standard and assayed with this ELISA Kit. The percentage recovery was calculated by comparing the expected and measured values. An assay linearity of 0.537 - 77 ng/mL has been identified as the usable range. Samples above this range must be diluted and re-run.

General Description
The hormone Cortisol is vital for several functions of the human body. A strong correlation exists between stress related conditions and Cortisol levels. Cortisol is a steroid hormone made in the adrenal glands. Among its important functions in the body include roles in the regulation of blood pressure and cardiovascular function as well as regulation of the body's use of proteins, carbohydrates, and fats. Cortisol secretion increases in response to any stress in the body, whether physical (such as illness, trauma, surgery, or temperature extremes) or psychological. When cortisol is secreted, it causes a breakdown of muscle protein, leading to release of amino acids into the bloodstream. These amino acids are then used by the liver to synthesize glucose for energy, in a process called gluconeogenesis. This process raises the blood sugar level so the brain will have more glucose for energy. Cortisol also leads to the release of so-called fatty acids, an energy source from fat cells, for use by the muscles. Taken together, these energy-directing processes prepare the individual to deal with stressors and ensure that the brain receives adequate energy sources. Cortisol is the most potent glucocorticoid produced by the human adrenal. It is synthesized from cholesterol and its production is stimulated by pituitary adrenocorticotropic hormone (ACTH) which is regulated by corticotropin releasing factor (CRF). ACTH and CRF secretions are inhibited by high cortisol levels in a negative feedback loop. Cortisol acts through specific intracellular receptors and affects numerous physiologic systems including immune function, glucose counter regulation, vascular tone, and bone metabolism. Elevated cortisol levels and lack of diurnal variation have been identified with Cushing's disease (ACTH hypersecretion). Elevated circulating cortisol levels have also been identified in patients with adrenal tumors. Low cortisol levels are found in primary adrenal insufficiency (e.g. adrenal hypoplasia, Addison's disease) and in ACTH deficiency. Due to the normal circadian variation in cortisol levels, distinguishing normal from abnormally low cortisol levels can be difficult, therefore several daily collections are recommended. Saliva is an excellent medium to measure steroids because it is a natural ultra-filtrate of blood, and steroids not bound by carrier proteins in the blood freely diffuse into saliva. Only about 1-10% of the steroids in blood are in the unbound or free form, and it is this fraction that diffuses into target tissues of the body, and into saliva. The majority (90-99%) of steroid hormones in the blood are bound to carrier proteins (cortisol binding globulin, sex-hormone binding globulin and albumin) and are unavailable to target tissues. The process of passive diffusion of non-bound (free) steroid hormones occurs because these small molecules are of a low molecular weight (less than 400 daltons) and are relatively nonpolar, thus enabling them to freely diffuse from blood to saliva. Bound steroids are too large to diffuse freely through the salivary cells into the salivary gland lumen.
Standard Curve
Standard Absorbance Units (450 nm)
Standard 0 (0 ng/mL) 1.88
Standard 1 (2 ng/mL) 1.75
Standard 2 (5 ng/mL) 1.58
Standard 3 (10 ng/mL) 1.39
Standard 4 (20 ng/mL) 1.09
Standard 5 (40 ng/mL) 0.75
Standard 6 (80 ng/mL) 0.47
Reconstitution And Storage
When stored at 2°C to 8°C unopened reagents will retain reactivity until expiration date. Do not use reagents beyond this date. Opened reagents must be stored at 2°C to 8°C. Microtiter wells must be stored at 2°C to 8°C. Once the foil bag has been opened, care should be taken to close it tightly again. Opened kits retain activity for two month if stored as described above.

Have you cited DEIA2788 in a publication? Let us know and earn a reward for your research.