SDS
Online Inquiry Add to Basket
Size
5000T
Sample
host plants
Intended Use
The test can be used to detect CCV in infected host plant tissues.
Storage
All reagent components should be stored at the recommended temperature to assure their full shelf life. The kit should be used within six months of purchase.
Sensitivity
Sensitivity of the ELISA is relative high. The virus can be consistently detected in infected plant tissues diluted at 1:810.
General Description
A virus with isometric particles about 29 nm in diameter, containing three major size classes of double-stranded (ds) RNA. It occurs symptomlessly in carnation and is present in low concentration in plant tissues. It is apparently not transmissible by sap inoculation or by grafting but is transmitted with high frequency through the seed. Causes no symptoms in carnation ( Dianthus caryophyllus) and apparently has no effect on those induced by any other virus when present (Lisa et al., 1981b).
Standard Curve 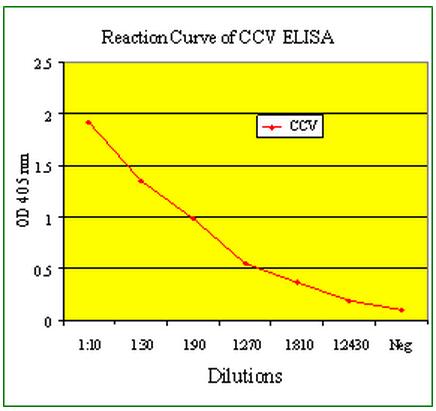 Have you cited DEIAPV108 in a publication? Let us know and earn a reward for your research.

A computational canopy volume (CCV) based on airborne laser scanning (ALS) data is proposed to improve predictions of forest biomass and other related attributes like stem volume and basal area. An approach to derive the CCV based on computational geometry, topological connectivity and numerical optimization was tested with sparse-density, plot-level ALS data acquired from 40 field sample plots of 500-1000 m(2) located in a boreal forest in Norway. The CCV had a high correspondence with the biomass attributes considered when derived from optimized filtrations, i.e. ordered sets of simplices belonging to the triangulations based on the point data. Coefficients of determination (R-2) between the CCV and total above-ground biomass, canopy biomass, stem volume, and basal area were 0.88-0.89, 0.89, 0.83-0.97, and 0.88-0.92, respectively, depending on the applied filtration. The magnitude of the required filtration was found to increase according to an increasing basal area, which indicated a possibility to predict this magnitude by means of ALS-based height and density metrics. A simple prediction model provided CCVs which had R-2 of 0.77-0.90 with the aforementioned forest attributes. The derived CCVs always produced complementary information and were mainly able to improve the predictions of forest biomass relative to models based on the height and density metrics, yet only by 0-1.9 percentage points in terms of relative root mean squared error. Possibilities to improve the CCVs by a further analysis of topological persistence are discussed. (C) 2014 International Society for Photogrammetry and Remote Sensing, Inc. (ISPRS). Published by Elsevier B.V. All rights reserved.

We aimed to elucidate the relationship between mild-to-moderate renal impairment and the development of coronary collateral vessels (CCV) in patients with acute coronary syndrome (ACS). We enrolled 461 patients with ACS who underwent coronary angiography for the first time. The development of CCV was assessed with the Rentrop score. Kidney function was classified according to the estimated glomerular filtration rate (eGFR). The Gensini score was used to show the extent of atherosclerosis. The mean eGFR value was 89.9 +/- 24.3 U/l for patients with no development of collaterals and 82.7 +/- 20.5 for patients who had CCV. The mean age was 59 +/- 11 years and 349 patients (75.7 %) were male. Rentrop classifications 1-2-3 (presence of CCV) were determined in 222 (48.1 %) patients. The presence of CCV was significantly associated with low levels of eGFR (p = 0.001), increased serum creatinine levels (p = 0.034), high levels of serum albumin (0.036), and the Gensini score (p < 0.001). Multivariate analysis showed that the Gensini score was an independent predictor of the presence of CCV (OR = 1.090, 95 % CI: 1.032-1.151, p = 0.002). We suggest that the association between mild-to-moderate renal impairment and the presence of CCV may be explained by increased myocardial ischemia and severe CAD.