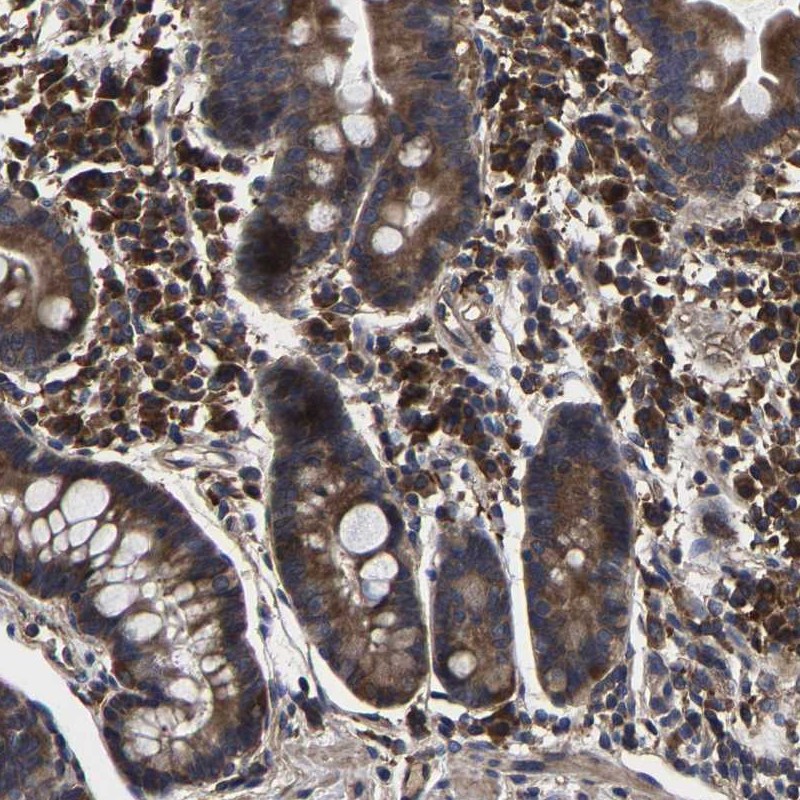 Application Notes
IHC: 1:50-1:200
*Suggested working dilutions are given as a guide only. It is recommended that the user titrates the product for use in their own experiment using appropriate negative and positive controls.

Gene summary
ITCH (Itchy E3 Ubiquitin Protein Ligase) is a Protein Coding gene. Diseases associated with ITCH include autoimmune disease, multisystem, with facial dysmorphism and syndromic multisystem autoimmune disease due to itch deficiency. Among its related pathways are Signaling by GPCR and Immune System. GO annotations related to this gene include ligase activity and ubiquitin protein ligase activity. An important paralog of this gene is AREL1. This gene encodes a member of the Nedd4 family of HECT domain E3 ubiquitin ligases. HECT domain E3 ubiquitin ligases transfer ubiquitin from E2 ubiquitin-conjugating enzymes to protein substrates, thus targeting specific proteins for lysosomal degradation. The encoded protein plays a role in multiple cellular processes including erythroid and lymphoid cell differentiation and the regulation of immune responses. Mutations in this gene are a cause of syndromic multisystem autoimmune disease. Alternatively spliced transcript variants encoding multiple isoforms have been observed for this gene.
Antigen Description
Acts as an E3 ubiquitin-protein ligase which accepts ubiquitin from an E2 ubiquitin-conjugating enzyme in the form of a thioester and then directly transfers the ubiquitin to targeted substrates. It catalyzes Lys-29-, Lys-48- and Lys-63-linked ubiquitin conjugation. It is involved in the control of inflammatory signaling pathways. Is an essential component of a ubiquitin-editing protein complex, comprising also TNFAIP3, TAX1BP1 and RNF11, that ensures the transient nature of inflammatory signaling pathways. Promotes the association of the complex after TNF stimulation. Once the complex is formed, TNFAIP3 deubiquitinates Lys-63 polyubiquitin chains on RIPK1 and catalyzes the formation of Lys-48-polyubiquitin chains. This leads to RIPK1 proteosomal degradation and consequently termination of the TNF- or LPS-mediated activation of NFKB1. Ubiquitinates RIPK2 by Lys-63-linked conjugation and influences NOD2-dependent signal transduction pathways. Regulates the transcriptional activity of several transcription factors, and probably plays an important role in the regulation of immune response. Ubiquitinates NFE2 by Lys-63 linkages and is implicated in the control of the development of hematopoietic lineages. Critical regulator of T helper (TH2) cytokine development through its ability to induce JUNB ubiquitination and degradation (By similarity). Ubiquitinates SNX9. Ubiquitinates CXCR4 and HGS/HRS and regulates sorting of CXCR4 to the degradative pathway. It is involved in the negative regulation of MAVS-dependent cellular antiviral responses. Ubiquitinates MAVS through Lys-48-linked conjugation resulting in MAVS proteosomal degradation. Involved in the regulation of apoptosis and reactive oxygen species levels through the ubiquitination and proteosomal degradation of TXNIP. Mediates the antiapoptotic activity of epidermal growth factor through the ubiquitination and proteosomal degradation of p15 BID. Targets DTX1 for lysosomal degradation and controls NOTCH1 degradation, in the absence of ligand, through Lys-29-linked polyubiquitination. Autoimmune disease, multisystem, with facial dysmorphism (ADMFD) [MIM:613385]: A disorder characterized by organomegaly, failure to thrive, developmental delay, dysmorphic features and autoimmune inflammatory cell infiltration of the lungs, liver and gut. Note=The disease is caused by mutations affecting the gene represented in this entry. The function about ITCH antigen include CXCR chemokine receptor binding; ligase activity; protein binding; ribonucleoprotein complex binding.

Have you cited DPABH-07808 in a publication? Let us know and earn a reward for your research.